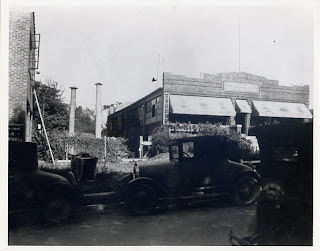 According to Leonard Mosley one of Walt's clients when partnered with Ub Iwerks and before he joined Kansas City Film Ad was RESTAURANT NEWS. Here's an interesting quote from Cecil B. DeMille's 1958 autobiography:

'Of course, the director-general could not individually know every one of the hundreds of people who work on a production. It was not until nearly 40 years later that I learned the identity of a youngster who was earning some $12 a week doing advertising sketches for Male and Female. I remembered how good the sketches were. They should have been good, for they were among the first work done in Hollywood by one of Hollywood's very few authentically creative geniuses, Walt Disney.'

MALE AND FEMALE was released in 1919, so obviously Walt wasn't in Hollywood so the above quote is in accurate, Leonard Mosley in DISNEY'S WORLD says the following:

'He showed (Jake) Carter ( Al Carder in Bob Thomas's WALT DISNEY AN AMERICAN ORIGINAL ) a picture that he had drawn of the most glamorous film star of the day, Gloria Swanson, seated at a table sipping champagne and seductively smoking a cigarette in a long. long holder. Walt had actually adapted the drawing from a publicity still of the big film then showing in town, Cecil B. deMille's Male and Female, but he had added some familiar potted palms and roman urns featured at a well-known local restaurant, and the caption underneath had Swanson say, "I always dine at Alfredo's when I'm in Kansas City."

Bob Thomas places this as happening at Pesmen-Rubin where Walt met Ub, Walt recalled doing the ad according to Thomas in an advetising conference:

" The Newman was playing a Cecil B. DeMille picture, Male and Female, and all I had to work with was a standing photo of the stars Gloria Swanson and Thomas Meighan. Well I thought it would make a better ad if they were lying down, and that's how I drew them."

I wonder if DeMille heard or read about the conference, as there would have been no way he would have seen the sketches from a small studio doing an ad for a local Kansas theater or restaurant whichever the case may be out there somewhere is this forgotten piece of Disney art, either in a programme for a Kansas theater or as an advert in a Kansas newspaper. Walt remembered it, it must have been one of his first big gigs.
Posted by Mark Sonntag at 6:30 PM