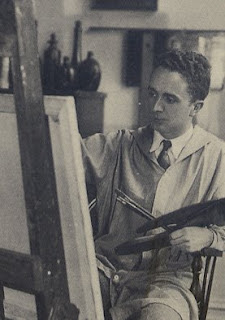 Recently I was thumbing through an old book on Norman Rockwell, I love his work, he was one of the great in his field. Anyhow, I got to thinking about an article I read a few years back which had a painting reprinted that had been inscribed to Walt Disney.

Were they friends? I wondered, and if so who contacted who? I decided to write to Walt's daughter Diane Disney-Miller, who very kindly wrote back the following story, most of which I've pasted below, only editing out a few things that I thought may be of a personal nature:

When I was very young I heard the name "Clyde Forsythe" a lot. I believe he was a member of Rancheros Vistadores, and may have brought dad into that group. It was something dad really enjoyed .. that long ride with companions over hill and dale of Santa Barbara County. Norman Rockwell did pencil portraits of my sister and me for dad. We went to dad's office to be photographed for the portraits, as I recall. I was ten, and Sharon seven, so it was in 1943 .. or 44. Rockwell had sent dad one of his original Saturday Evening Post covers .. the Girl reading a Magazine one. We were all very excited about it, but I can't remember if the Post cover came before our portraits. Dad was invited to come to Rockwell's studio to pick out the cover of his choice, but couldn't spare the time to do it .. I remember this discussion at home .. so sent someone else to do it. This might have been Forsythe. I learned from a woman who was doing research for a book on Rockwell for the museum that Forsythe was a cartoonist, and that he and Rockwell had shared a studio at one time. She contacted me because she wanted to know more about the relationship between the two men, too. We have copies of a letter dad sent to Rockwell thanking him for the gift. "All the fellows are coming up to my office to see it .. " something like that. Rockwell's studio burned down sometime around this.. and art and letters were lost.

The Post cover and our portraits hung in dad's office. After his death Sharon and I had our respective portraits in our own homes, and the cover was in our family office (Retlaw Enterprises).After my mother's death in December of 1997 .. 2 months short of her 98th birthday .. we closed the family office, and I took possession of the cover for a time. It is inscribed "To Walt Disney, one of the truly great artists, from an admirer, Norman Rockwell." Ron and I visited the (Rockwell) museum in the Berkshires .. it was a lovely trip . . . and I decided that our painting belonged there, and that's where it is now .. on a sort of permanent loan.

. . . .There is an incident described which must be the first meeting between the two men. My parents are driving through New England with Hazel and Bill Cottrell. Hazel was my mother's sister, and Bill a long time colleague of dad's (and a dear uncle ). When they come upon Rockwell's studio, maybe by chance, or by design, dad wants to stop and meet the master. Rockwell's staff has been instructed to not admit casual visitors, so dad is turned away. Rockwell happens to see him leaving, and runs out the door to meet him. It all sounds very plausible. Dad was a very spontaneous guy. He would see nothing amiss in just dropping in on someone.

What a great story, what a great scene. Thank you very much to Diane for sharing that story with me.

To anyone within striking distance of Stockbridge, Mass., where the Rockwell Museum is located, if you have never gone, go. Go now! Run do not walk! it will cahange your life! Seeing original Rockwells, many at a time, is not recommended for those with bad hearts or pregnant wimmen!

Diane and Ron Miller donated the original but were given a copy of the tribute painting, which I've seen.

I think it will be among several items put on display when The Walt Disney Family Museum, at The Presidio of San Francisco, opens in 2009.