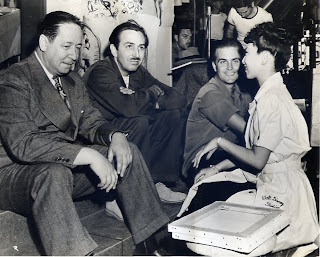 Among the first photos I e-mailed Didier Ghez a couple of years ago were behind the scenes photos from THE RELUCTANT DRAGON. I recently added this one to my collection, the snipe on the reverse reads:

"In 'THE RELUCTANT DRAGON', which Walt Disney is making for RKO Radio, the famed creator of Mickey Mouse and Donald Duck uses live action actors for the first time. Robert Benchley, star of the film, and Disney are pictured here on Benchley's first tour of the cartoon studio where Benchley met artists and learned how animated movies are made. 'THE RELUCTANT DRAGON' relates Benchley's adventures in studio, including screening of cartoon he has seen in process of creation."

Incidently, Robert Benchley was the grandfather of JAWS author Peter Benchley, and was himself renowned for his own series of short films which satirized contemporary life at the time, see KINO Video's ROBERT BENCHLEY AND THE KNIGHTS OF THE ALGONQUIN.

ADDED JULY 1: Can anybody confirm that that is Ken Anderson on Walt's left?
Posted by Mark Sonntag at 12:07 AM

Great photo! That is Ken Anderson sitting beside Walt, right?

You know, I didn't even notice, it sure looks like him. Thanks for pointing him out.

Thanks for that, I guess my source was wrong.