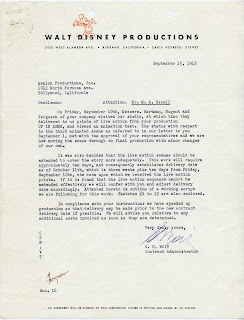 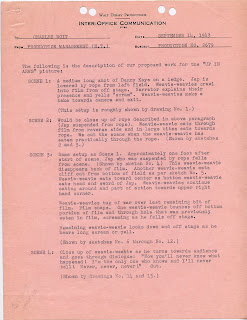 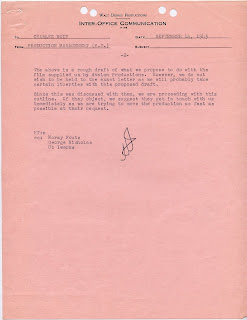 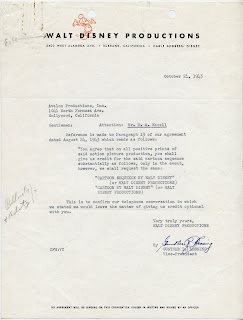 I recently acquired the above three documents outlining a proposed animation sequence to be done by Disney for the 1944 Sam Goldwyn movie UP IN ARMS starring Danny Kaye. I haven't found anything regarding Disney's involvement but to my surprise I found that the Gunther Lessing letter (which I had e-mailed Didier Ghez some time ago for posting) seems to confirm it.

I don't remember ever seeing the movie, does anybody know if the sequence in question was ever produced? or, know where I can find a clip?

1943 fits into the period where Disney's finances were at it's lowest ebb during the war, it would be interesting to know how many non Disney projects the studio was involed in. From the silent days up to the war. We know there were animated titles for Leon Schlesinger (would be cool to find that footage) and THE HOLLYWOOD PARTY. Any thoughts?
Posted by Mark Sonntag at 1:07 PM

A few seconds -- and I mean seconds -- of this was screened at a Disney Archives program at the Museum of Modern Art some years back. It was hard to tell exactly what we were looking at, and the archivist advised that not much was known of how the sequence figured into the Goldwyn/Kaye picture. It was clear that elaborately animated Technicolor bugs were eating something, but there wasn't enough footage extant to get a fix on the scene.

I would think that the H.T. in Production Management would be Harry Tytle (at this time still Harry Teitel)...