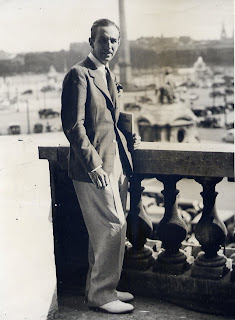 I'm back with more photos.

FROM THE REVERSE SIDE:

Walt Disney, whose animated cartoons are known throughout the world, came to Paris for a rest. This first thing that greeted his eye was a copy Les Trois Petit Cochons (Three Little Pigs to you). They can be found by the dozens (in book form) in any French railroad station.
Mr. Disney is pictured with a French version of his famous movie in book form, on the roof of the Hotel Crillon in Paris. ACME, June 25, 1935
Posted by Mark Sonntag at 3:30 PM