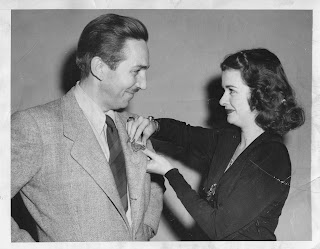 Here is a photo I bought some time ago, the snipe on the reverse says:

DISNEY HONORED FOR KINDNESS TO ANIMALS

In recognition of his strong appeal for kindness to animals in his film, "Bambi" Walt Disney was given one of the few gold medals ever awarded by the American Humane Association for the Promotion of Kindness to Animals. Joan Bennett is shown making the award on behalf of the association.

I e-mailed this photo to Walt's daughter Diane, she noted that "Joan Bennet was married at that time, I believe, to dad's good friend Walter Wanger." Joan Bennet by the way was a well known actress at the time and Walter Wanger an independant producer the classic "Stagecoach" being one of many productions he produced.

I am very interested in hearing more about Walt and his views on animal welfare if anybody has any stories to tell. Clearly he loved animals but he was well ahead of his time in many ways and in some ways still is
Posted by Mark Sonntag at 3:48 PM