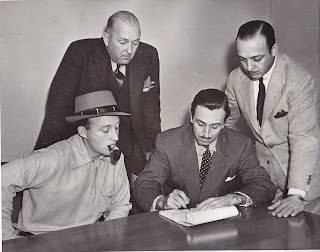 This photo is something of a mystery to me, mostly because I haven't been able to find out anything about the development of the project Walt is signing his name to. Here's what the snipe on the reverse reads:

LOS ANGELES, CALIF - Walt Disney yesterday brought something besides talk into the Madison-Square-Garden of the west picture, when he signed a $3,500,000 lease for a 34-acre Hancock Park site. Disney represented the Hollywood Sports Gardens as president in completing a 50 year contract lease for most of the property which the arena will be built on.

Does anybody know anything about this project or whether or not it ever happened? I'd imagine it may have been related to Walt's polo activities. Bing Crosby was known for breeding and racing horses.
Posted by Mark Sonntag at 11:23 PM

Jack Lindquist references Walt's involvement in Hancock Park in his book, "In Service to the Mouse." He mentions it in context to the Disney company's involvement with baseball. Gene Autrey owned a minor league ball team. I don't have the book with me right now, so I can't be sure whether Walt had an interest in it or whether it was linked to Hancock Park in any way. When MLB expanded, Gen Autry bought a franchise. He and Walt were long-time friends and Gene encouraged Walt to be a partner. Walt declined... his reason was that he didn't want a disagreement in an owner decision, like whether to trade a favorite pitcher, to get in the way of their friendship.

In his book, Jack Lindquist describes being on the board of the California Angels, with Walt's blessing. The Anaheim Stadium and Disneyland were inextricably linked as major Anaheim attractions, and Lindquist says that he continued to push the idea of Disney ownership of the Angels until Eisner finally bit.

I mis-spoke in the previous comment. On page 217 of 'In Service to THE MOUSE' Lindquist writes, "Both Walt Disney and Gene Autry were baseball fanatics.... In the 1950s, Gene had been a minority owner of the minor-league Hollywood Stars, and Walt was on the board of directors for the team. The Stars played at Gilmore Field, which was on the corner of Fairfax and Beverly Boulevard."


Gilmore Field is just a few blocks directly west of Hancock Park. Robert Cobb, owner of the Brown Derby Restaurant, acquired the Hollywood Stars of the Pacific Coast League in 1938 and took on several Hollywood celebrities as minority shareholders, including Gary Cooper, Barbara Stanwyck, Robert Taylor, George Stevens, Cecil B. deMille, George Burns, Gracie Allen, Gene Autry, Bing Crosby, and Walt Disney. Gilmore Field was opened in May 1939. It was an intimate stadium with a seating capacity of 13,000.

The team operated until 1957. It was disbanded when the Brooklyn Dodgers moved to Los Angeles. 'Sparky' Anderson was a Hollywood Stars bat-boy at one time. Gene Autry sold his shares in the team back to Cobb. He got back into baseball twenty years later when he bought the AL franchise that ended up in Anaheim.

It seems to me that the presence of Bing Crosby and Walt Disney in the photo is too much of a coincidence for anything other than them representing the same consortium that owned the Hollywood Stars. By February 1939 the construction of Gilmore Field must have been almost complete and the consortium may have been developing much bigger plans.

I hope that this helps a bit.

This photo appeared in the L.A.Times for February 9, 1939, along with a story that begins as follows: "Walt Disney yesterday brought something besides talk into the Madison-Square-Garden-of-the-West picture, when he signed a $3,500,000 lease for a 31-acre Hancock Park site. Disney represented the Hollywood Sports Gardens as president and Raymond W. Stephens acted for Capt. G. Allan Hancock in completing a 50-year contract lease for most of the property running from Fairfax to Gardner and from Third to Drexel streets. Bing Crosby, board chairman, and William LeBaron, head of the Sports Club to be a part of the new project, were on hand. Walker and Eisen, architects, are now drawing the plans for the largest covered stadium in the world--bigger than New York's Madison Square Garden or Chicago's Stadium." Etc. No further mention of Walt. I don't know just what became of this project.

Thanks Michael, An interesting little side story, just like another story I've been trying to learn more about . . . MT Disney which Walt supposedly bought in 1939, right where Chaplin shot the opening shots for The Gold Rush.