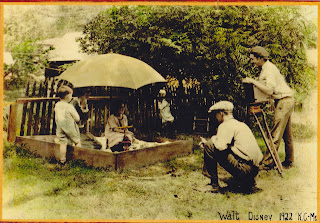 I've had this for about a year, it was supposedly scanned from the original photo belonging to the Cowles family.

Walt can be seen at the far right of the photo filming the the Cowles children. That's probably Mrs Cowles in sand pit with the kids. One of Walt's principal backers in the Laugh-O-Grams venture was Dr. John V. Cowles and this is no doubt his family. It was also in 1922 that Laugh-O-Grams placed an add in the Kansas City Star offering their services to photographing babies.

The upcoming "Walt Before Mickey" will cover this and more, hopefully in more detail than we've read before, I can't wait for that one.
Posted by Mark Sonntag at 9:30 PM

I have this photo and others. this and other photos were taken at my granfathers home The childern are Minnie Jeanett Cowles ( my mother) John V. Cowles 11 and Virginia Cowles. My Grandfather Dr. John Vance Cowles took the photo of Walt & Rory Disney

Hi, thanks for confirming the photo, wow what a story. Though I believe that is 'Red' Leon next to Walt and not Roy. Roy was in California recovering from TB at the time. Thanks again, it was a real treat hearing from you.

Dear Anonymous, There are a couple of Disney historians whom I know who would love to contact you. Would you mind e-mailing me at thetag1@yahoo.com.au ?

Does anyone know the address
Is it 300 34th street?